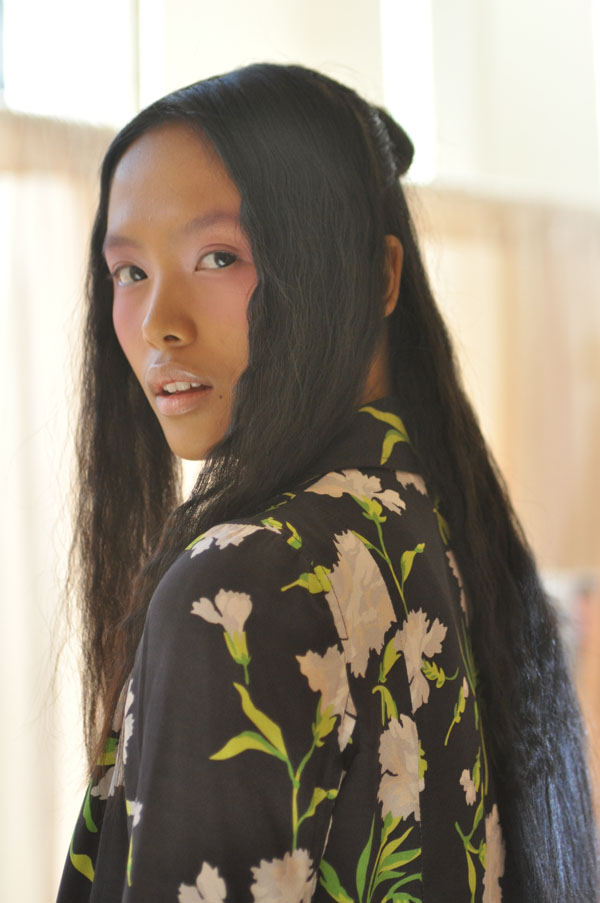 Mixed elements combine in this is eclectic hairstyle that Nick Irwin, Hair Director for TIGI, created to really channel Chris’ collection and its clashing patterns, colours and styles. “Chris’ clothes are really eclectic – lots of denim with dresses over the top, so I wanted to get a similar effect with different ideas in the hair.”

Nick also wanted to ensure that the style didn’t obscure the collection “I wanted to show the intricate collars and detail of the outfits, so that’s where the division is important, especially over the right shoulder.” 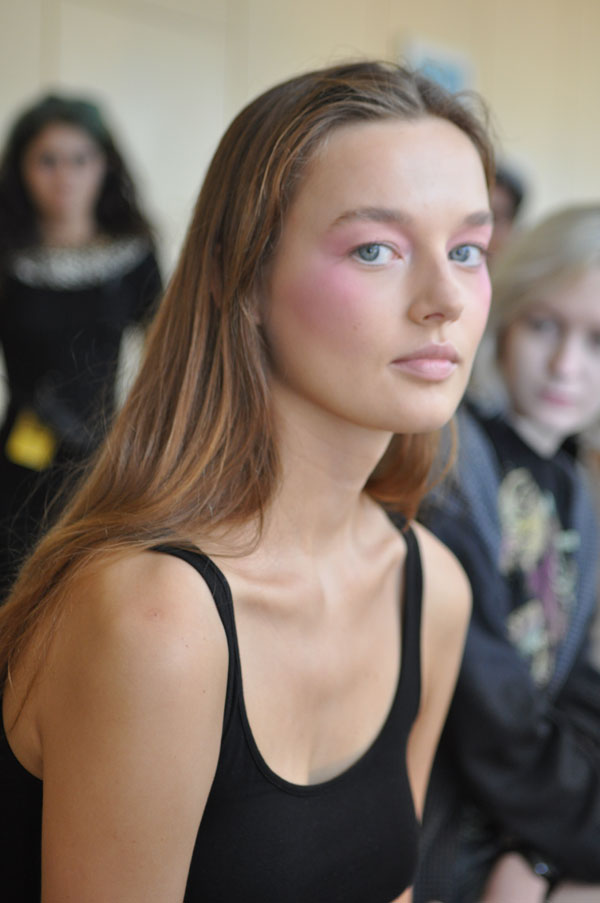 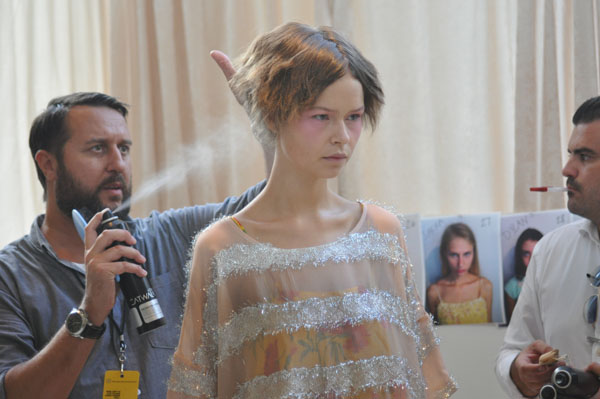 Nick also referenced Manga / Japanese school girls who combine rebellious and pretty, and the Lord of the Rings elves top knots with a seventies, soft, slightly static texture to the lengths of the hair, “lots of things clashing together”. “Chris has all these references that in a mad way come together”

“I wanted girls to be able to do it themselves, for it to look real, not overworked. The braid in the right side that we left in looks like it was left by accident.”

Five girls also wore embellished tiaras or combs with pieces of drift wood or fake flowers. Again, not all, so that the styles all look slightly different.

How to get the look: Step by step

1 – Start with dry, clean hair. Add a tangerine sized ball of Burlesque Strong Hold Mousse from Catwalk by TIGI mousse and spread throughout the hair, from root to ends.

2 – Spray Session Series Salt Spray throughout and blast with the hair dryer, using a brush to keep the strands smooth and separate.

3 – Part hair across the head, starting and ending behind each ear. Fasten out of the way to concentrate on the front. Create a feathered part with the end of a comb, not worrying too much about neatness – the look is all about being a little bit random.

4 – Section front sides into two and plait until you are around two inches from the ends of the hair. Fasten with a small elastic. Every braid should be fastened this way, leaving the ends ‘straight’.

5 – Using the end of a sectioning comb, make a part in an almond / half moon shape behind the right ear. This is for your fishtail braid. Braid and secure with a small elastic.

6 – Part the hair from the edge of the fishtail section to the left ear. This top section will eventually be the bun, but you’ll need to braid it first. For now clip it out of the way.

7 – Braid the remaining back section, leaving the last two inches unbraided as before.

8 – Now for the bun. Divide the section diagonally and braid as you have with the other sections.

9 – If you have time, you can let your hair set this way naturally – either by leaving it for as long as possible (hours!) or sleeping in the braids overnight. If you’re in a hurry, you can use a hair straightener to set the braids.

10 – Undo the braids using your fingers and brush out with a natural bristled brush – all except your fishtail braid of course! Tip – hold the centre part down to set closer to the head using clips and tissue – the tissue will stop you getting telltale ‘creases’ in your hair. Keep your ‘bun’ section until last so you don’t lose the part.

11 – Unravel the ‘bun’ section and brush out. Fasten a ponytail as close to the scalp as possible, and tie with hat elastic. Tease the ponytail with your brush to create volume and exaggerate the texture, then twist lightly to create a twisted, messy bun. Use the ends of the elastic to secure the bun by tying across it – as if you’re dividing it in half.

12 – Fishtail flair – the stylists ‘messed’ up the fishtail braid by rubbing it between their palms to create static and loosen the plait.

13 – The entire look was then fixed with Session Series Work It Hairspray. 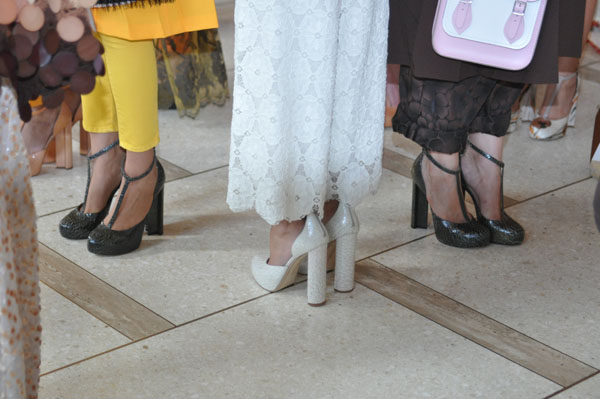 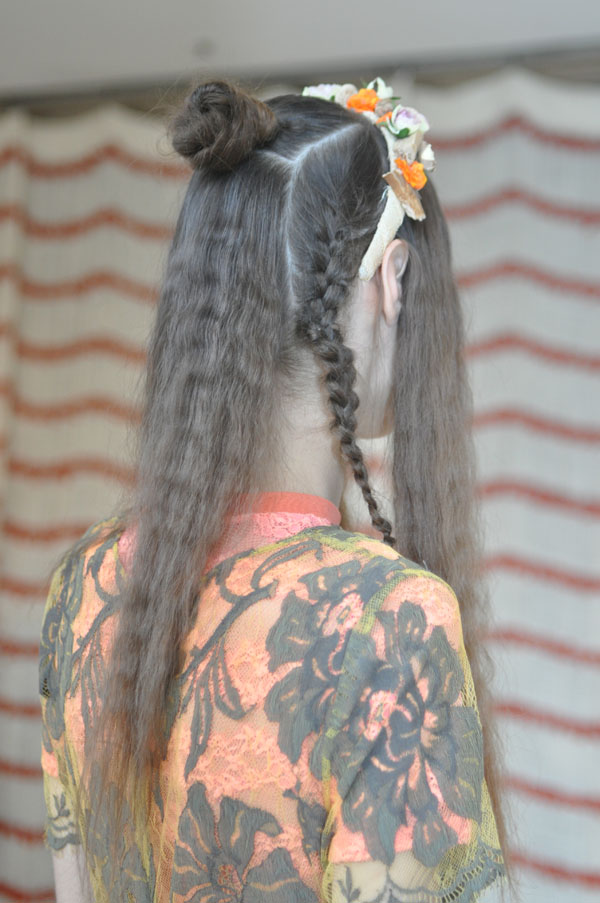